Some people from Arizona's past have become the stuff of legends. But, then, truth is often stranger than fiction anyway. 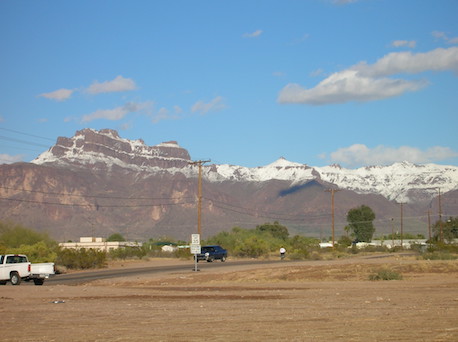 The story of the Lost Dutchman's Mine is a famous Arizona legend. Although the story has some basis in fact, in some places, it's difficult to say exactly where the facts leave off and the story begins. The "Dutchman" of the story was a man named Jacob Waltz. He was a prospector from Germany (the "Dutch" was a confusion of the German word "Deutsch", which is what Germans call themselves, just like with the Pennsylvania Dutch, who are descended from Germans) who came to the Arizona Territory during the 1860s. For awhile, he traveled around the territory, working for awhile at the Vulture mine in Wickenburg (Treat 54). He arrived in the Salt River Valley in 1868 (“Jacob Waltz 'Lost Dutchman' Exhibit”).

There are records that Waltz had several mining claims near Prescott, but none of them were valuable. Even so, during the 1870s, he showed up in Phoenix with several bags of gold. He immediately started spreading his money around, buying people drinks and bragging that he found a mine in the Superstition Mountains. He never told anyone exactly where the mine was, but he made occasional trips back to it whenever he started running low on money. To keep others from following him, he would drag blankets behind his mules to get rid of their tracks (Treat 54).

In those days, the Superstition Mountains were dangerous because the Apache believed that the area was sacred, and bands of Apaches would attack people who trespassed there. Waltz recruited a man named Jacob Weiser, also an immigrant, to accompany him on his expeditions as a guard. However, Weiser was killed by Apaches on one of their trips when Waltz left to get supplies, leaving him alone at their camp. At least, that was what Waltz said. Some people thought perhaps Waltz murdered him. Others were also killed while looking for Waltz's mine, and Waltz himself, suspiciously, was never harmed when he went to his mine (Treat 54).

There are some who believe that Waltz discovered a gold mine that had once belonged to the Peralta family or that he found a stash of stolen gold that Apaches hid in the mountains after killing a group of miners from Mexico (“Jacob Waltz 'Lost Dutchman' Exhibit”). The Peraltas were a wealthy family from Mexico who were known to have mined a considerable amount of gold in the Arizona Territory during the early 1800s. In 1848, the Peralta miners were murdered by Apaches, who took most of their belongings, but it's possible that Waltz may have found bags of gold that were left behind after the attack and forgotten, saving Waltz the trouble of mining the gold himself. There is some evidence that supports this theory. In the 1850s, a couple of prospectors reported finding gold with some dead burros, probably animals that fled from the attack on the miners. However, there is another explanation for Waltz's amazing find. Some think that Waltz was a bandit, robbing and murdering other prospectors for their gold (Treat 54-55).

At the time of his death in 1891, Waltz was living in Julia Thomas's home in Phoenix. Supposedly, just before his death, he left a series of clues with her that pointed to the location of his mine. Although she went looking for the mine, she was never able to find it. Julia Thomas is known to have made and sold fake maps to the mine to other searchers in the hope of getting money to make up for what she lost looking for the mine herself. When she told her story to the writer Pierpont C. Bicknell, he helped to popularize Waltz's legend (“Jacob Waltz 'Lost Dutchman' Exhibit”).

Over the years, many people have tried to find the mine, and some have claimed to succeed, although they've never been able to prove it. As the legend grew, more people made up fake clues to the mine's location. It can be difficult now to tell fact from fiction and the false clues from the ones Waltz originally left. The search for the mine continues to this day, although there are now strict rules about prospecting (“Jacob Waltz 'Lost Dutchman' Exhibit”).

The Baron of Arizona

In 1881, a man named James Addison Reavis made a startling announcement: that, by virtue of purchasing an old land grant that the king of Spain had given to a man named Miguel de Peralta, he was now the rightful owner of a large portion of what was to become Maricopa County. His territory included not only all of what is now Phoenix, but also much of the rest of the Phoenix metropolitan area, like Glendale, Paradise Valley, and Tempe. Reavis put up posters to inform the local landowners that they were actually on his land and would have to make restitution with him. Reavis even had the papers necessary to back up his claims (Sullivan 67-68).

Of course, the landowners brought lawsuits against Reavis. At first, it seemed like Reavis's claims were legal, and the lawyers began negotiating settlements. However, further investigations proved that Reavis's documents were fake, just very clever forgeries. There never was any such land grant, and the people supposedly connected with it never existed (Sullivan 68).

Reavis had been a Confederate soldier during the Civil War, which was where he first discovered that he had a gift for forgery. He used to forge the signatures of superior officers on passes. After awhile, he started making payroll records for imaginary soldiers. He would make out checks for the made-up soldiers and keep the money for himself (Sullivan 68).

After the war was over, he went to Santa Fe and found a government job that involved looking into Spanish land grants. The king of Spain would give gifts of land in the Americas to favored subjects, and the government of the United States had promised to honor the status of these landholders in the Treaty of Guadalupe Hidalgo of 1848. Even the Gadsden Purchase of 1853 had provisions for these land grants, and as Arizona became an official US territory and began pushing toward statehood, the status of landowners became even more important. Working for the government, Reavis learned all about it and began hatching a plan to give himself a Spanish land grant (Sullivan 69).

He started by inventing a fictional family which could have received a land grant from Spain. The fictional character at the center of his plan was Miguel de Peralta, a distant relative of the Spanish king about 200 years earlier. Reavis worked out a complete family tree for this man and studied Spanish, particularly focusing on the language as it would have been spoken around the time that the land grant was supposedly created. Then, he practiced making and writing with quill pens, putting as much detail into his plan as he could. When he was ready, he carefully chose real old documents to support his claim and used chemicals to remove the real names from them, adding in those that he had invented. Then, Reavis forged documents to say that he had purchased the land grant from a vagrant living in the area (Sullivan 69-70).

When Reavis sprang his land grant on the people of the Arizona Territory, he did it under the name Don James Addison de Peralta-Reavis, giving himself the title the Baron of Arizona. Reavis's forgery was so convincing that the US government almost paid him 25 million dollars to settle "his" land grant. However, the surveyor-general, Royal Johnson, found evidence of the forgery in 1890. Investigators for the US Court of Private Land Grant Claims chemically analyzed the inks of the documents, uncovering where Reavis had added his made-up names and revealing the original ones (Sullivan 71-72).

In the end, Reavis was sent to prison for his fraud. His wife (for whom he had forged documents to make her appear of noble blood) disappeared with their children (Sullivan 73).