I consider "oddities" to be weird and unusual places. Arizona is full of them!

There is something strange about the clock tower on the old Pinal County Courthouse in Florence. Basically, it's not really a clock tower. Oh, there's a tower all right, and it looks like there's a clock, but no matter when you look at it, the time is always 11:44. That's because the clock is fake. When the architect designed the building, he wanted to add a real clock. However, the board of supervisors didn't want to pay for one. Instead, the architect turned the clock face into a decoration instead of a functional timepiece. The building has been renovated over the years, and the fake clock continues to be repainted, which is all the maintenance it really needs (Lowe 137).

But, the weirdness doesn't stop there. I've been inside the building, and not only is there no way to get into the clock tower, but this is only a two-story building. See all of those windows on the third floor? They're fake, too. They are just decorations on the roof of the building with no rooms behind them. There's even a dormer with a chimney coming up through it (not pictured because it's on the other side of the building). 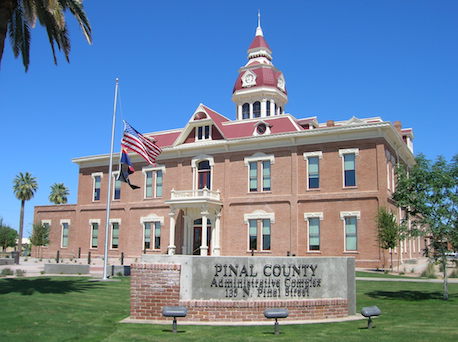 In Tombstone, there is a giant rose tree that was planted back in 1885 by Amelia Adamson at her boardinghouse, where miners used to live. It's a Lady Banksia Rose that now has a trunk 4 feet thick and is 8 feet tall with branches that extend over 8,000 square feet and need to be supported by a trellis. The trellis was first built around 1904. In the 1930s, Robert Ripley of Ripley's Believe It or Not declared that it was the largest rose bush in the world, and the Guinness Book of Records agrees (Lowe 172-173). 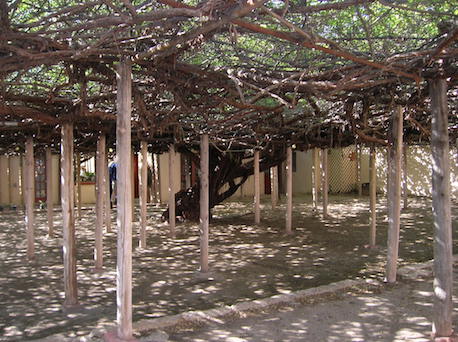 When I was there, there was a viewing platform so that you could climb up and see the top of the tree. From there, you can get a look at the actual roses, which are white. The boardinghouse is now a museum which explains how people used to live in Tombstone. 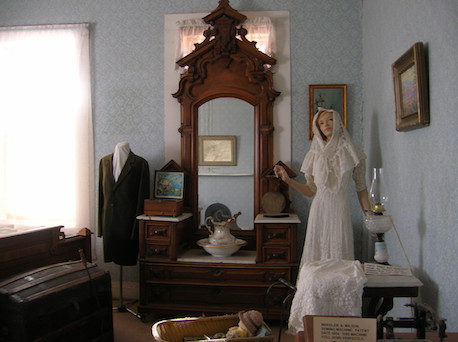 If you would like to visit the museum and see the rose tree for yourself, you can find them here:

The Territorial Jail in the Arizona Museum of Natural History 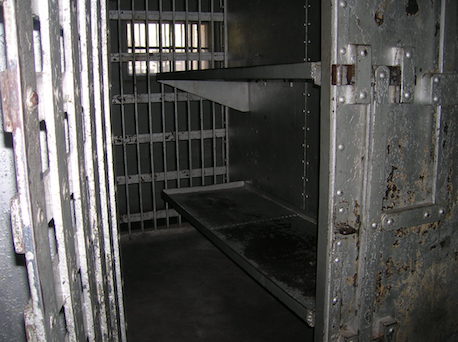 There are real jail cells in the Arizona Museum of Natural History in Mesa. I remember playing in them when I was young, so I couldn't resist including them here. According to the signs at the exhibit, the cells originally belonged to the Maricopa County Territorial Jail, just south of Phoenix. They were constructed in 1883 (over the objections of the Maricopa County Board of Supervisors, who each wanted funds for their personal projects instead, proving that some things never change). Carl Hayden (later Senator Hayden) was the Sheriff of Maricopa County from 1909 to 1912, when these cells were still being used. In 1937, this particular block of cells were relocated to Mesa where they were used in the city jail until the new Mesa Police Building was finished in 1975. Back when they were in use, the bars of the cells were black and the walls around them were just cement.

Some of the earliest inhabitants of the cells were cattle rustlers and horse thieves. No one ever successfully escaped from these cells, and they were sometimes used to hold Federal prisoners.

Conditions in the cells were harsh. At the time the cells were in use, prisoners were only allowed two meals a day, usually a cold sandwich and a cup of coffee. They had to sleep on the hard steel bunks with no mattress or blanket, just as they appear in the cells today. However, it was the prisoners' own fault because when they were allowed mattresses and blankets, they tended to set them on fire. Don't ask me how they acquired matches because the exhibit doesn't say. Pink underwear doesn't sound quite so crazy now, does it?

However, female prisoners were not kept in cells like these. They had a separate room to themselves with windows, bedding, and even a shower.

In the museum exhibit, the doors on the cells are heavy and difficult to move quickly, and the locking mechanisms have been long-since disabled, so your older brother can't lock you in and leave you there, no matter how hard he tries. You can ask me how I know that, but I think some questions answer themselves.

There are a lot of other great exhibits at the museum, which is especially known for its dinosaurs and gold-panning.